The bus tour to the Khmer Canadian Buddhist Cultural Center for Asian Heritage Day of May of Alberta was very outstanding. Please, see video below of the news:

The annual meeting was overviewed and summarized by the President in his remark on how wonderful tasks have been accomplished within this 2012 and it is the concrete pavement for 2013 as well. There are 10 activities that KCYAA has undertaken. Among those, two activities were incorporated with other associations while the rests are proudly organized by the excellent team leaders. 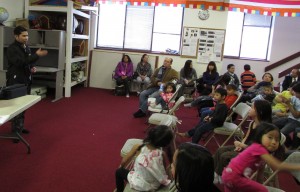 For the overall presentation of the 2012 activities and accomplishment, please click on this link

More than this, Vichet who is the Secretary gave detailed speech to the audiences for the Action Plan 2013 that has been endorsed by the executive members. Future plan is the framework of the Khmer Youths Association. Without outlining future plan and achievable framework, we don’t think we have done a proper thing. Planning is very important to looking forward for change and minimize risk for that change.

After the spectacular presentations by each executive committee on their parts of works and responsibilities, the session was followed by the awarding scholarship to more than 6 recipients presented. This scholarship awarding offered the great motivation for Cambodian Canadian children to pursue their school excellence and looking for high education such as college, professional development and university. From last three years, the recipients have enrolled in various universities, in college and working within various profession within Canadian competitive society. Not only that is visibly impacting their personal strive for success, some of them are engaging with the community by joining with the Youth Executive Committees as well. This is the over expectation from our scholarship program. 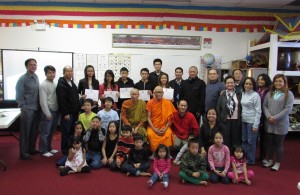 At the end, the event was joyful with the Bowling Event. Everyone had fun after hard work at school and working places. This fun activity has created an invaluable space for youths to create network within their interest group and for parents to engage with their children. We strongly believe in the power of networking and effective communication. 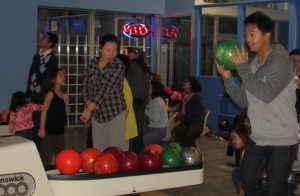 Thank you very much everyone for your participation and hard work.

Khmer Canadian Youth Association would like to cordially invite all members 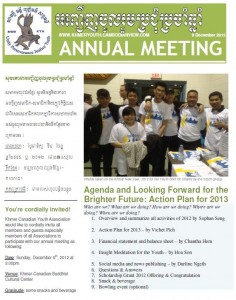 and guests especially members of all Associations to participate with our annual meeting as following:

Gratitude: some snacks and beverage

Agenda and Looking Forward for the Brighter Future: Action Plan for 2013

This year is the third year Khmer-Canadian Youth Association celebrated the anniversary of Paris Peace Agreement (PPA). This year, the theme focused on “How peace mean to us? And how we can build peace?”

Many speakers who come from various disciplines and different backgrounds shed us light and gave us great input on this Peace Commemoration.

Sophan who is the president of the Youth Association and chair of the PPA Commemoration committee stressed on the importance of PPA comparing to the great civilization of the Angkor Era. He also valued the PPA as the renaissance of Cambodia. Further to his statement, the Youth will keep organize the Peace Commemoration annually to provide public with right understanding and help build peace together collectively. This concerted effort will not only ensure that Cambodia can get fruition from the PPA, the world will also share this peace process.

MP Wayne Cao who is the member of parliament of Alberta government gave us a great importance on the decline of two countries who signed the PPA but Cambodia is still alive. The Russia union and Yugoslavia have been split, but he observed that Cambodia has been stronger by the PPA. He emphasized that the cold war has been died while the connectivity of people in the world has become more visible. On his sight back home of birth in Vietnam, Mr. Wayne Cao reflected on his life and his friend which both have born in the same location but made a living in different situation of political circumstance and economic development. Mr. Wayne highly appreciated the Peace Commemoration and he will join this celebration in years to come. Ms. Janyce Konkin who has extensively worked in Cambodia for “Initiative for Change” described the importance of building peace within individual first before expanding it to others such as family, community, nation and the world. In this context, Janyce shed us insight on both practical knowledge and academic theory. As her MA major focused on peace research, her conclusion wholly rests on individuals who must initiate peace within themselves first before outreaching to others. But she accepted the original interdependent of inside peace affects outside peace, and outside peace also affects inside peace. Her theory is not different from that of Lord Buddha and late Cambodian monk Maha Ghosananda. For the PPA, according to Janyce, it is a good instrument for peace development in Cambodia. For Lynda whose profession is a teacher especially her experiences in South East Asian countries, the social media will play important role in this region. Observing from what has been happening in the Middle East or Arab Springs, social media will inevitably drive force for change in countries such as Burma and Cambodia. She highly commenced on the following up news easily received by internet through computer or cell phone as the step stone to advance social change. Her moving philosophy on powerful leaders only who are afraid of their own crimes, corrupted mind, violence, killing, threatening and their secrecy that will be one day disclosed…not us who are afraid nothing and we must not afraid them. For Mr. Pol who is the recipient in Master’s Degree of Social Work and Psychology from the University of Calgary, PPA has brought many things to Cambodia and her people. Huge aids have been annually transferred to this country. Not only the country and her people have benefited from the PPA, the Cambodian government led by the Cambodian People Party has tremendously benefited from this PPA. However, he viewed that the government is still falling short on implementing the PPA. Special Rapporteur of the United Nations has recently recommended Cambodia to reform NEC or National Election Committee to ensure that election is fair and neutral. Poverty and injustice have become a key point of failure of the government in abiding by the PPA. More than this, the killing of environmentalist Chhut Vutthy and the humiliating of Ven. Luon Sovath have been an outstanding case current government is losing its face at the international arena. All members who participated the commemoration this year have highly admitted that PPA is the pillar of this country. Without PPA, Cambodia might not be able to exist today. Mr. Roeung like Mr. Pol and Mr. Sophan as well see the PPA is the legacy of King Norodom Sihanouk who passed away at the age of 90 years old on 15 October 2012 at Beijing. Millions of Cambodians including Buddhist monks mourned and shared condolence in last few weeks. Mr. Chan Voeun highly appreciated the effort of Youth who can make this commemoration successful today. In conclusion, PPA or Paris Peace Agreement this year has been celebrated by Cambodian people worldwide such as Canada, United States of America, Australia, Cambodia, French, Switzerland and many other countries. There are Cambodian people demonstrated in front of the United Nations in New York, and at the headquarter of the UNs in Switzerland. This commemoration has been seen as the public education, unification and peace building for all people regardless of their political tendency, color, age or social status. The participants and organizers have expected to build lasting peace and sustainable development for Cambodia. All participants and organizers got off home to the union or street to commemorate this day in order to stop all culture of pointing finger and coloring on each others.

May all being experience Peace, Progressive and Justice!!

This is a sad story of a Cambodian maid worked in Malaysia. In general, Cambodians don’t know the situation and life style of Malaysian people. Many of them think that people of Malaysia are rich and can give them a lot of money. In reality, the living standard and life style might be not in what they are dreaming. This story of Sokleang is heartbreaking and regretful. We wish her recover from her mental problem soon. Thanks to all sympathetic people towards her.

On behalf of her family, we would like to express our sincerest thanks to all individuals, media and authorities who assisted in bringing Phat Sokleang back to her family. Sokleang left her home on the morning of Monday, August 27, 2012 and disappeared for two days. She was found in Tuol Krosang Pagoda, located in Sen Sok District, Phnom Penh on Wednesday afternoon, August 29, 2012. Sokleang is now at home safely in Kamong Siem District, Kampong Cham Province.

As a victim of labor trafficking, Sokleang is not in a proper mental state. She was a normal girl before working as a maid in Malaysia in 2005. Sokleang was 15 years old when she was recruited for domestic work. After only 4 months of employment she returned to Cambodia with horrific mental trauma that has ruled her life for the last 7 years. Barely able to speak or eat and refusing to wear clothes she was tied to her family home for her own safety. After locating her in 2011, CLEC has been helping her family to provide proper medical treatment and rehabilitation. 7 years on, she is receiving treatment from psychological doctors. Sokleang was only one of an estimated 50,000 Cambodian maids in Malaysia.

Sophoan and Vichet have organized the annual Seminar of the KCY-AA on 20 May 2012. There were many guest speakers and participants were presenting there. The theme for this year is about “Education, Health and Career of the Youth”. But while we were unfortunate to get response from the speakers who are specializing on Health and Career, we were fortunate to have many speakers who were great at Education for youth especially in the field of Conflict Resolution, Initiative for Change, Youths at the Front Line and Open Society for Youths etc.

As the result, we can summarize the seminar into three categories:

– What is the actual independence for a country for youth? – The answer is depending on the individual youth who must pursue their own independence first before exploring independence of others and the nation.

– What is the actual drive of power in the developing countries? – The answer is referring to three Khmer words “ខ្លៅ=Klao, ឃ្លាន=Klien and ខ្លាច=Klach” or “អវិជ្ជា=no education, អត់អាហារ=hunger and ភ័យខ្លាច=fear”. The speakers concluded that in developing countries, leaders have defused these three elements to prolong their power. Among those is to frighten their citizens (objects) to carry out the politics of threatening and control, for instance in Sudan and Cambodia.

Please, watch this video for more educational speech on this year Seminar.

Thank you very much for your kind participation and wisdom sharing.

By coming to this page, you will learn more on our activities and successes. Your participation and interest in our youth group is invaluable!

This is the new page, we have tried to update and release more recent news.

Our former page, could be accessed at: khmeryouth.cambodianview.com